Then, this fall we were out releasing Monarchs and we sat on the bench to take a quick break when I spotted a large green and yellow caterpillar!  I think it was actually larger (and greener) than this one.  But here’s a picture of one of our larger caterpillars on some Queen Anne’s Lace. 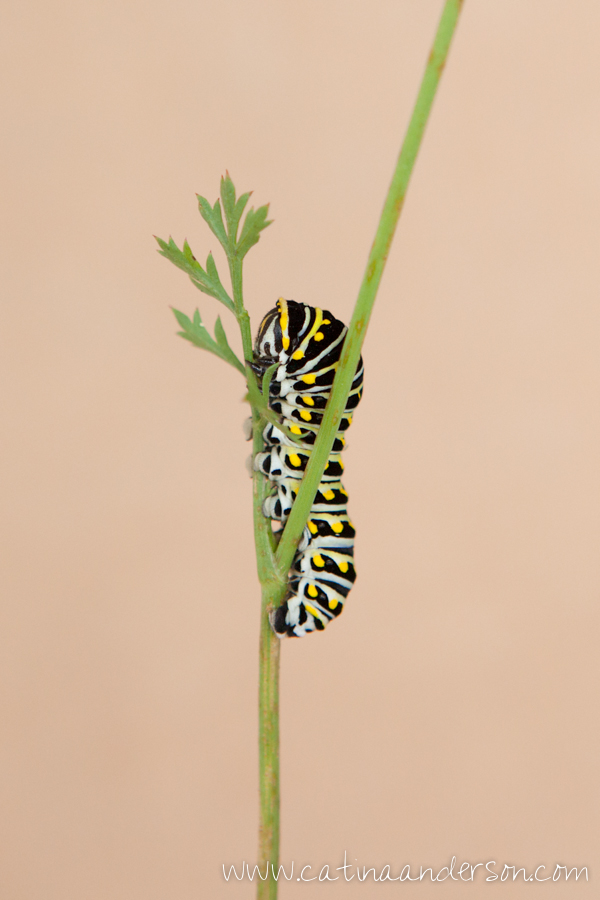 In that sitting we found 3 large caterpillars and brought them inside to watch them and protect them from predators.  The next morning I started googling and learned that the black swallowtail caterpillar looks quite different in its earlier stages (instars) than in the later stages that we had found so I headed back out to the garden.  Sure enough… there were more.  MANY more.  Only these little guys weren’t green and yellow.

In fact, my daughter said to me after we found them, “I think I saw these yesterday but thought it was bird poop!”

Yes!  In fact they are thought to be adapted, in their earliest stages, to mimic bird poop as a protection from predators (such as birds) who might want a snack!  Here’s what the tiny ones looked like: 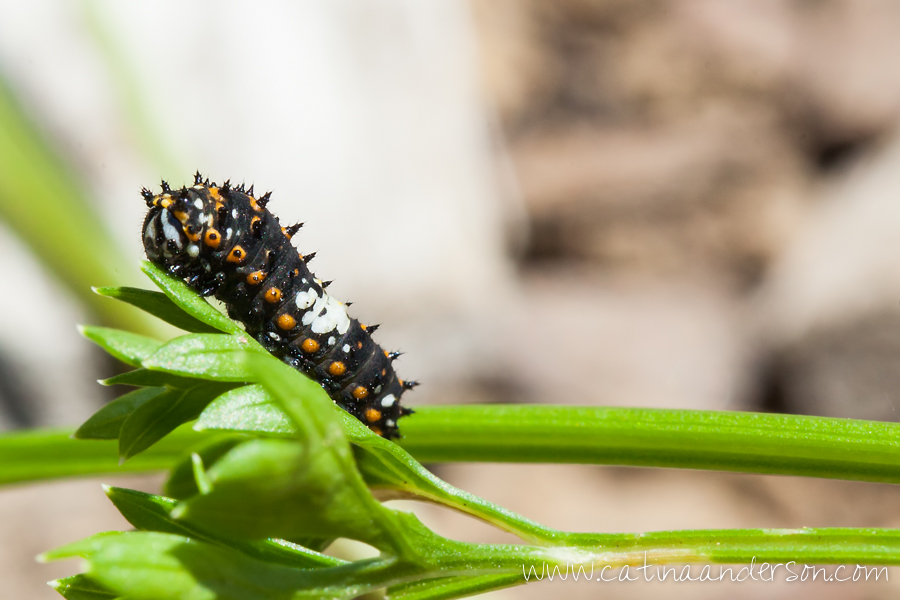 We ended up finding over 30 of them!  Amazing!

So we brought them in and fed them every last bit of parsley we had until there just was no more.  I read that feeding them store bought parsley is a big no-no … even the organic type!  Believe it or not, there is a “natural” (meaning a “found in the soil so it’s not a synthetic chemical”) substance called BT that is permitted in organic farming which kills caterpillars.  Great for grocery stores… not so much for these little guys.  So I headed to FB where I put out a plea to friends who might have some caterpillar food!  Thankfully these guys eat a variety of plants in the wild carrot family so a friend had a large field with queen anne’s lace sprinkled throughout and that became my go-to until these guys were big enough to pupate.

Here’s what this type of caterpillar looks like just before it pupates.  So amazing that they hang there with that thin string!

And here is a caterpillar just before pupation and a chrysalis newly formed.

The chrysalides also have quite a lot of variety in appearance.  From what I’ve read they will even vary in color based on their surroundings.  Most of the ones we raised were brown but there were a couple green ones in there as well.

So, according to what I found on google, the fall brood will either produce butterflies in a few weeks after pupation OR they will overwinter as a chrysalis.  Unfortunately you just have no way of knowing which it will be… so we’ve been waiting and watching for a couple weeks.  And yesterday we started to have a few butterflies emerge!  This was super exciting because when you don’t know if it will be 2 weeks or 4 months imagine the joy of walking in the room and seeing a beautiful, perfect butterfly waiting for you!

Here is the 2nd butterfly we released – just today.  I believe it is a male because it was smaller in size and had only a tiny bit of blue on its wings, as compared to females which have much more blue.  Although, if you are an expert and find this to be incorrect, please let me know!

This has been a wonderful new experience and I think I will plant a whole ROW of parsley next year – as well as dill, fennel, and Golden Alexander.  It’s fairly rare that we see an Eastern Black Swallowtail in the summer and  I sure would love to see more of these beautiful butterflies.  If you plant it, they will come!