When we moved into our house the kitchen was painted blue.  I thought – wow, what a pretty color…

With the contrast of orangey-toned cherry cabinets I’ve just never been a huge fan of the blue (despite it being my favorite color… and despite the fact that I have at least 3 other blue rooms in my house that I LOVE).  Finding an accent color to go with it and the orange cabinets has been a struggle… because I’m not a fan of orange overall.  And finding kitchen linens to match the greenish/tealish blue of the walls has been near impossible.

But, my husband loves the blue kitchen.

So it stays… and I gripe.

That is until now.

A few weeks ago I was browsing yarn at JoAnn Fabrics and came across a skein of Bernat Handicrafter Cotton in a variegated color called Emerald Isle.  It caught my eye because I liked the colors together – a mix of blues and greens and off-white.  I grabbed it thinking that maybe it would work with my kitchen.  When I got home it matched the walls quite well so I decided I’d do a few dishtowels.  The more I worked with it, the more I liked it.

That’s when I realized that I like it because it’s what I see when I look out my kitchen windows.  The blues of the wall next to the greens of the trees outside.  I hadn’t thought of green as an accent color in the kitchen but it works!

After I made a few dishcloths I moved on to a drying mat, a hand towel, and then placemats…

I can be a little obsessive…

variations on a theme!

I love to take an element and then see how many variations I can create – deciding in the end which I like best.  In this case my theme was the Emerald Isle Cotton and a stitch texture that I liked from the first dishcloth I made.

For the dishcloths I really liked the stitch I found in the “Three Color Simple Stitch Dishcloth” by Kara Gunza published on the blog Petals to Picots.  (LOVE Petals to Picot!)

When it came time for the placemats I really wanted to use this stitch and have them coordinate with the dishcloths both in yarn color and in the texture of the stitch.

I found the “Options Placemat and Coaster” pattern by Marilyn Coleman for Red Heart (North America) that I really liked for the edging.

So, following the same basic instructions for the placemats but using the stitch from the dishcloth for the inside texture I created my coordinating placemats.  I chained 70 for the initial chain and did my first single crochet into the 4th chain from the hook (as the dishcloth instructions indicated).  Then, since I was using single crochet for every row (instead of alternating single/double as the placemat pattern instructed) I did 49 rows of the single crochet stitch pattern.  This gave me a center before edging that was equal to what the placemat pattern called for.

Here is a close-up of the stitch I used and the border attached: 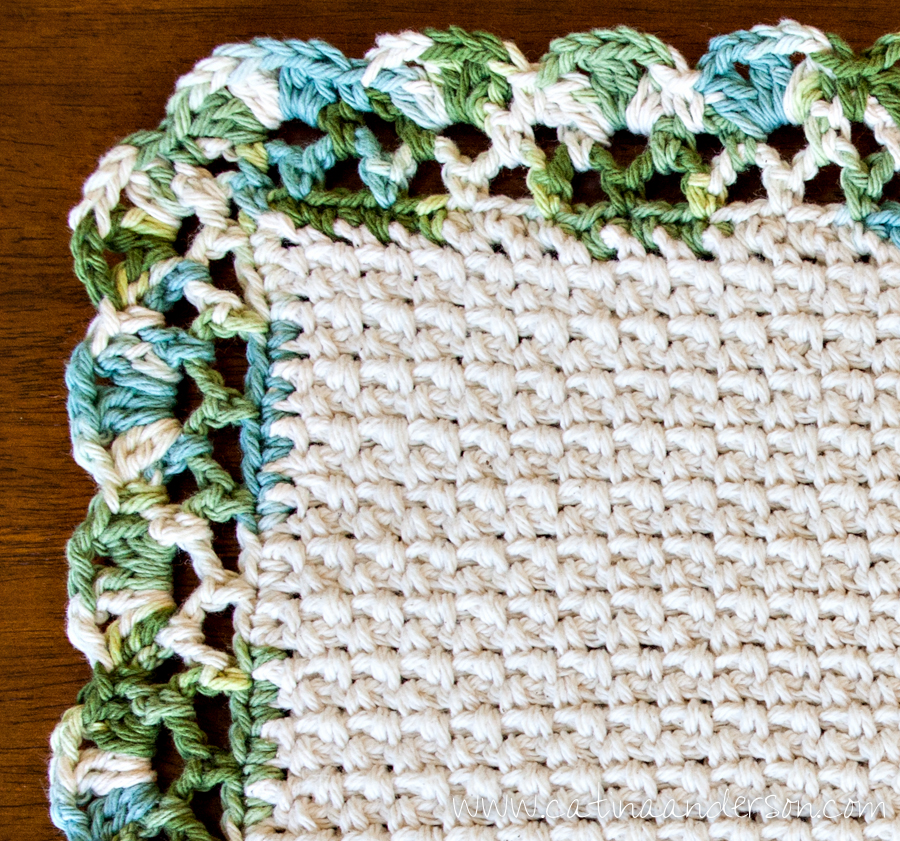 Here is the first completed placemat. 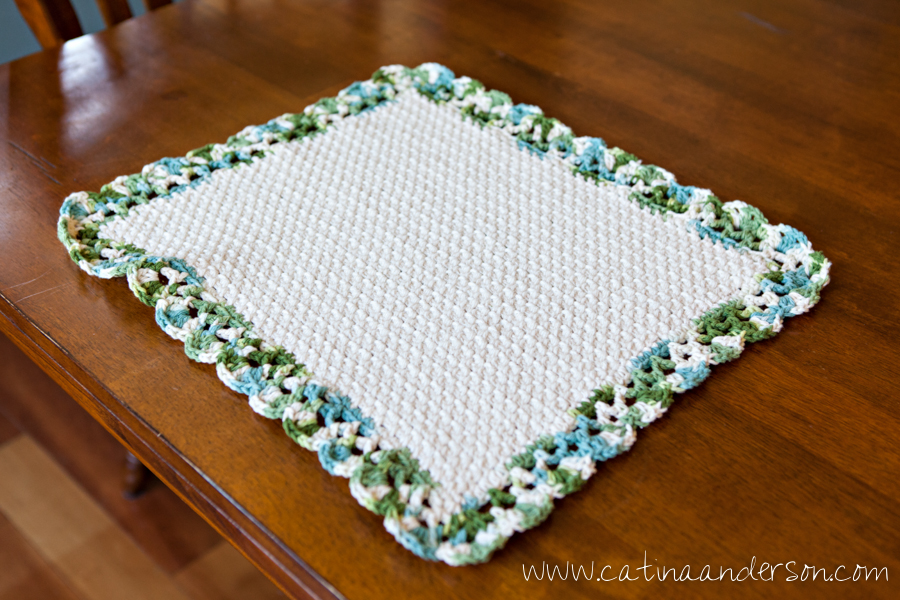 I really like how this turned out.  But, then I had lunch with my kids.

After the three hours it took to make one placemat I was not keen on the idea that a stain might ruin it within minutes of it’s first use.

So I decided to swap the colors and use the white for the edging with the more forgiving variegated yarn for the center. 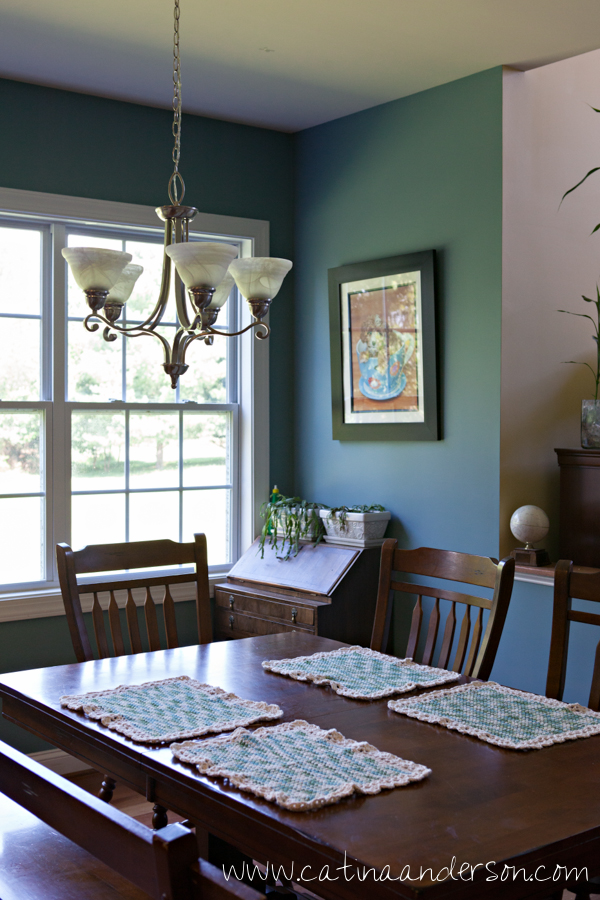 I should probably take the time to block and iron them… but the reality is that I’m just not that formal or particular.  They seem to get more flat as they sit on the table and honestly, the first wash would wash away that work so… I’m happy as they are.  They tie together our kitchen walls with the green from the trees just outside the window.

I went ahead and made a set of 10 – which is usually the max number of guests we have at our big family dinners.  At three hours per placemat that was a significant investment of time… but we had a long car ride last week (44 hours in fact…) so I had the time to invest!

I made a set of coordinating coasters too.  I also used the Options Placemat instructions but I only did the first 2 rows of the border for these coasters because it got to be just too big for my taste with all four rows.  For the center I used the stitch pattern from the dishcloth and did an initial chain of 16, sc into fourth chain from hook for 13 stitches across and did 13 rows… so the border pattern was able to be tacked on exactly as written.

I’m done with these placemats.  I like them – they are quite country but I like that too.  I’m not done with my kitchen theme though… tomorrow I’ll share some trivets I’ve been working on (which I LOVE).  And… I’m thinking that I may try to find or develop a pattern for a more modern-looking placemat as well.

After all… there is still yarn left 😉

« a little sunshine… I Love these Trivets! »

Yay! They came out so awesome!! So glad you liked them 🙂