Last summer we had a large oak tree and several surrounding smaller trees chipped into mulch. The oak had fallen back in 2009 and I presume was dead several years prior to that. The surrounding smaller trees fell when this huge oak came down. They left 2 large piles of hardwood mulch in addition to a huge stack of wood logs. After letting it sit for the requisite year we started taking wheelbarrows of mulch to our flowerbeds this weekend.

As we were spreading the first bed of mulch we discovered several of these HUGE beetles. 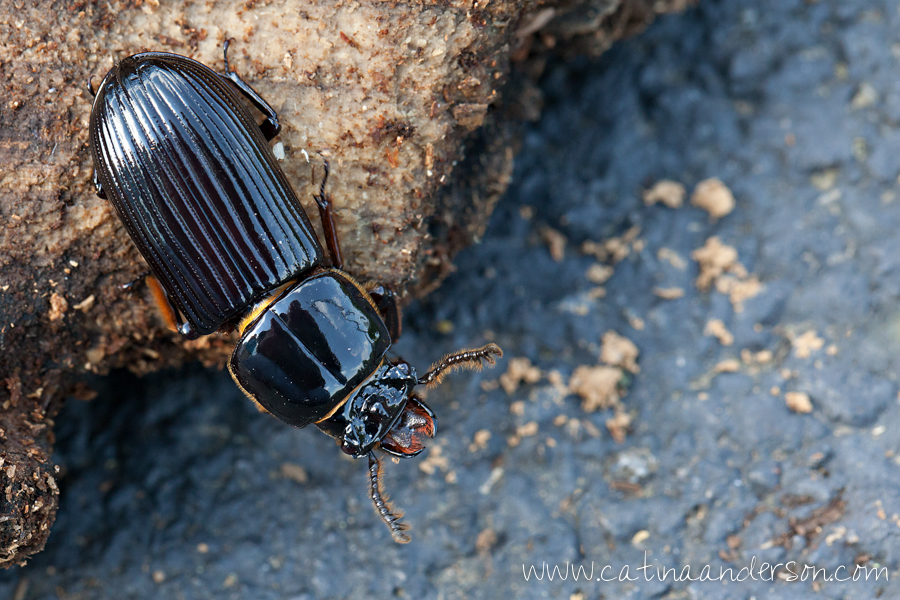 They were each at least 2 inches in length. As would be expected from this former biology teacher I called the kids over and ran inside for my camera and macro lens. We took a lengthy break from mulching for an awesome teachable moment. We discovered the hair on it’s legs, antennae and mouthparts first. 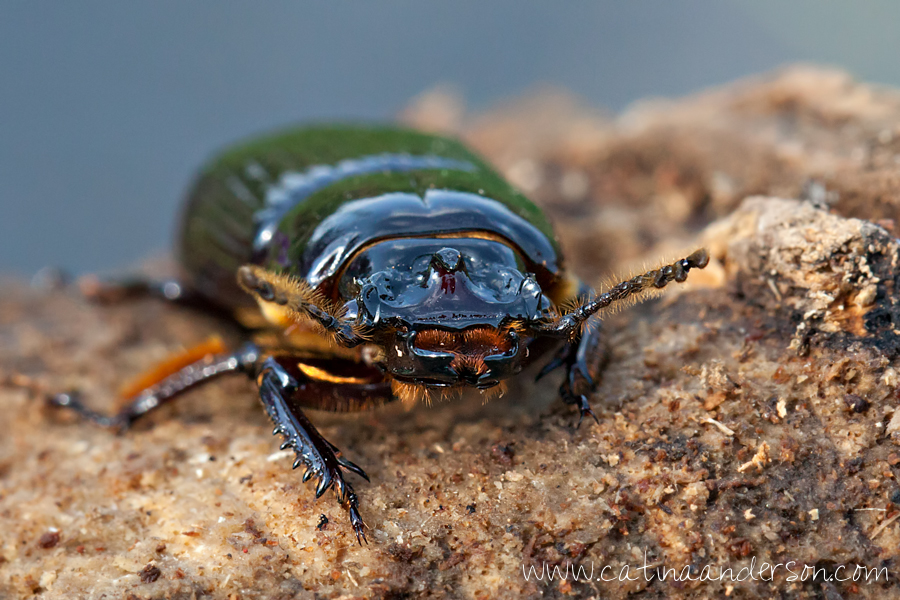 Don’t be fooled by the reflection in this photo – his body was dark black but my daughter was wearing bright lime green garden gloves and like any good pair of patent leather shoes they reflected the color of the surroundings which was picked up in the photos.  In a few of the pictures it looks like it has a bluish tint from the sky or picks up the green from her gloves.  But it was jet black.

Then we heard it making noises which sounded like hissing (called stridulation) as we tried to coax him with a piece of mulch to move the way we wanted him to go… he was clearly agitated. We took a handful of of pictures (if I’m being honest it was until I ran out of room on the memory card…) and then set the camera aside to finish mulching. 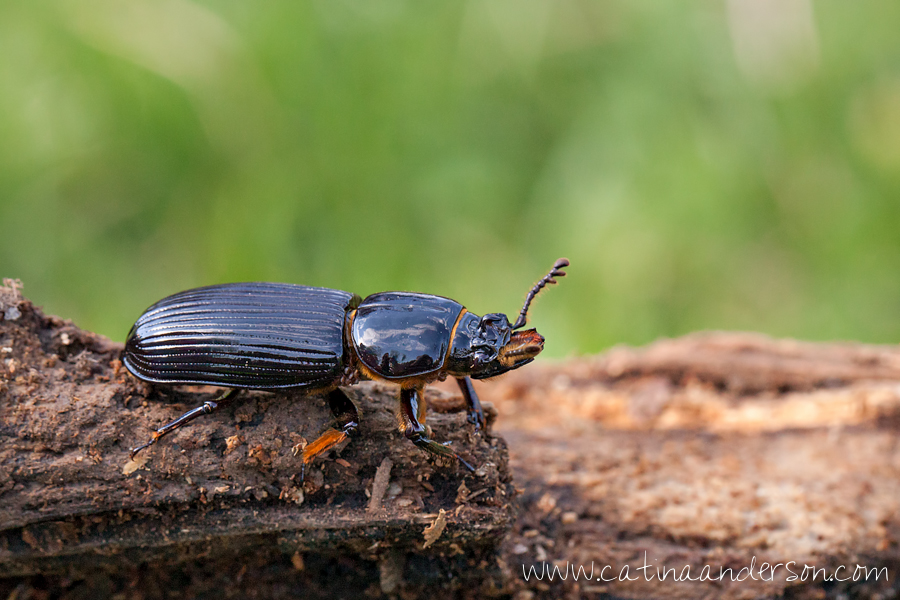 The real excitement began after we uploaded the card to the computer. At first we thought we had a stag beetle, with the most likely candidate being an oak stag beetle. But, thankfully we stumbled onto a National Park Service website showing a variety of large beetles that reside in our region and the reddish brown hairs clearly differentiated our beetle from the oak stag. Instead, we found we had a horned passalus or patent-leather beetle.

Armed with the correct identification we searched google one more time and found this AMAZING website called “Featured Creatures” from the University of Florida.

This is where I got really geeky… we read that there are mites that live on these beetles and as we browsed the gallery of photos that’s when we noticed the mites on our beetle!  Check it out!

This was super cool because they were something we absolutely missed in real life, a discovery afforded only by having the photos to examine and enlarge.

We also loved this shot where you can clearly see the horn from which it gets it’s name.  Look right there in the center of it’s head – a tiny structure pointing out toward the mouthparts.

The featured creatures website also mentioned that these beetles have 10 segments on their antennae… something the kids could count in the photograph.

The website also mentions that these beetles can fly but usually don’t and ours was no exception.  Although they made noises and quickly tried to crawl away, they did not attempt to fly.

Finally, the main information we were seeking, they are beneficial decomposer insects.  As it seems they don’t pose a threat to the garden area we plan to just leave them be.  An interesting little (or large!) inhabitant in our garden.  Honestly, the kids learned so much from our observations and searching that I think they feel like we have these secret little pets wandering around in our mulch now.  Any potential fear evaporated and I’m sure they’ll be excited to share what they’ve learned with visitors that might be lucky enough to catch a glimpse.  And yes – despite their intimidating appearance… we feel lucky to have had the opportunity to get up close and learn about this amazing creature.

For more information on this insect visit the University of Florida website on the horned passulus by clicking here.

« Looking Up in NYC WWII Airplanes »